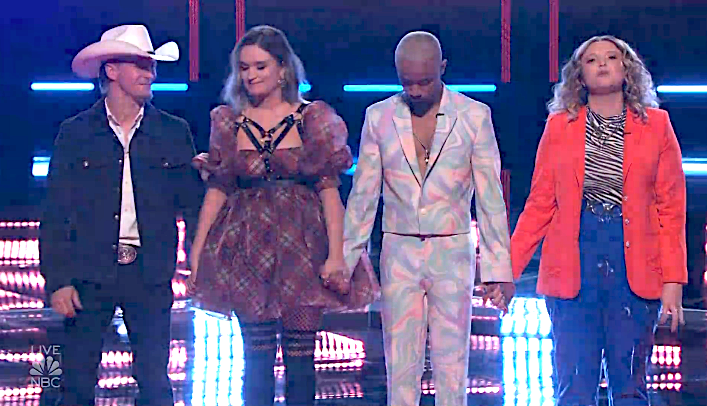 Tuesday brought The voice The top 16 results show of season 22, the first live results show of the season, and for the first half of the episode, there were few surprises. In fact, if I may gloat for a moment, I did correctly predict 10 of the top 12 contestants, albeit with the slightly different voting order for John Legend’s team.

It was only when it came time to fill the final spot of the top 13 round, via a real-time public-voted Instant Save sing-off among the four remaining contestants, that the episode became hit or miss.

So, at the start of the night, host Carson Daly explained that the two vote winners from each team, according to Monday’s top 16 performances, would advance, after which each coach would save a third artist. For Team Blake, America voted for alternative singer-songwriter Bodie and country heartthrob Brayden Lape, as predicted, though it came as a bit of a surprise when Blake Shelton decided to save teen-pop singer Rowan Grace instead of “straight down the middle.” . country singer Bryce Leatherwood, whom Blake had been so he would be in the top 13 for sure. But Blake revealed that he had strategically based this decision on “who had already passed,” so perhaps he thought Bryce and Brayden would cancel each other out on future votes. Or maybe, just maybe, Blake was just sure that (spoiler alert) Bryce could win the Instant Save.

For Team Legend, the United States voted rightfully through deserved teen diva Parijita Bastola (as I had predicted) and flamboyant rocker Omar José Cardona (John was right about that result; I was wrong). John then saved “The Velvet Powerhouse,” Kim Cruse of course, and since I assumed America would vote for Kim’s dynamite Aretha Franklin cover, Team Legend’s top three lineup basically ended as I’d predicted anyway. .

As for Team Gwen, the United States voted for new school song stylist Kiqué (he seemed surprised, but I certainly wasn’t) and old school soul singer Justin Aaron, as I had called him. It also came as no surprise when Gwen Stefani saved her beloved “muffin” mini-me, 19-year-old pop star Alyssa Witrado, despite the fact that her recently stolen contestant, Kevin Hawkins, with whom she obviously shared a less solid bond, had delivered the strongest vocal performance on Monday.

And that left new trainer Camila Cabello and her team. America (and I) got it right in casting country-rock badass Morgan Myles and the genius Devix, and while I was pleased (and not surprised) that Camila saved the show’s blaster Eric Who, aka the self-proclaimed star of The Eric that showsmy heart goes out to former favorite Kate Kalvach, whose Monday performance had been derailed by technical problems that was in no way her fault, which she had handled like a true professional.

But all was not yet lost for Kate, or Team Legend’s Bryce, Kevin or Sasha Hurtado, as they sang for redemption and a wild card spot in the top 13, all doing songs of their own choosing. I thought Bryce with “Let Me Down Easy,” the Billy Currington song, not the Chris Isaak one, which would have been so much more interesting, was an odd choice for a save me song. It was hardly a vocal showcase, and the sentiment almost seemed defeatist, as if he had been waiting to come home. I assumed that this, plus the fact that he was singing in first place at a disadvantage, meant that Bryce would do Go home. But (spoiler alert) I should never have underestimated the devoted country/Blake-fan voter base of this show. “I wasn’t too stressed about putting Bryce in this situation,” Blake said.

Sasha’s cover of Sia’s “Elastic Heart” was such a great fight anthem, and her coach John told her, “I loved that you chose this song about resilience!” It was a complicated song, very wordy, and there were moments where Sasha clearly struggled to keep up, but she really made it in the end as her confidence grew. It probably wouldn’t be enough to save Sasha from elimination, but John praised her for “never being afraid of the moment, always rising to the occasion.”

And so, it seemed like it would all come down to Kevin and Kate. It’s it seemed that way, anyway.

Kevin’s choice to do Childish Gambino’s “Redbone” was risky, albeit off-brand… but man, did he ever make it! This was the most exciting performance of the night, quite a vibe. It was obvious that Kevin really Dearthis win, and got deeper and deeper into the groove as he played that supple falsetto and entertained the crowd like a true star. And the crowd loved him, and even all four coaches gave him a standing ovation. “Wow, the room is explodingraved Gwen, who surely must have been questioning her decision to save raw Alyssa over seasoned Kevin. “That was so amazing. Everyone is impressed by you. I can’t even talk, it’s so loud in here right now!”

Kate was last, historically the best instant save position, and while Miley Cyrus’ 2010 movie theme song “When I Look at You” may not have been the best fight song choice, and Kate’s performance Kate wasn’t as sassy or fiery as Kevin’s, there was no doubt that Kate had the best vocal of the night. Her clear bell tone was beautiful, and this time, her redeeming performance went off without a hitch. “Kate, oh my gosh! Everyone freaked out. I choke. All he choked,” Camila gushed. “You have one of the best voices this entire season.” Later, Camila even declared that Kate had “one of my favorite voices of all time.”

But apparently the United States disagreed, and voters at home went “straight to the middle” for… Bryce, of course. Bryce actually gave the weakest performance among these four contestants, but this kind of disappointing result seems to happen every season with Blake’s team; perhaps this outcome was not so unpredictable after all. It will be interesting to see if average country singers do as well, and struggle as easily, once Blake is gone. The voice after season 23.

But in the meantime, the top 13 from Season 22, including Bryce, will be back next Monday to compete again. Until then.

FIFA plans to kill the World Cup group stage drama. Here’s how to save it.